Last year, my daughter was studying at the London School of Economics.  My husband and I wanted to visit her with our son for a grand family experience.  By January, our son was on a roll with perfect attendance at school and he was not interested in any travel plans that would alter his record.  This narrowed possible travel dates to his spring break, which was also Easter weekend and Resurrection Sunday.  For my husband, this option was a nonstarter.

My position was that my parents took my brother and me out of school multiple times for journeys to other countries.  I believe our lives were richer having those international experiences.  My husband’s position, ‘Weppydear, you still struggle with fractions, your family was in the Holy Land for two weeks when they taught it and by the time you got back the class had moved on and you could not catch up.’ Husband had a point. 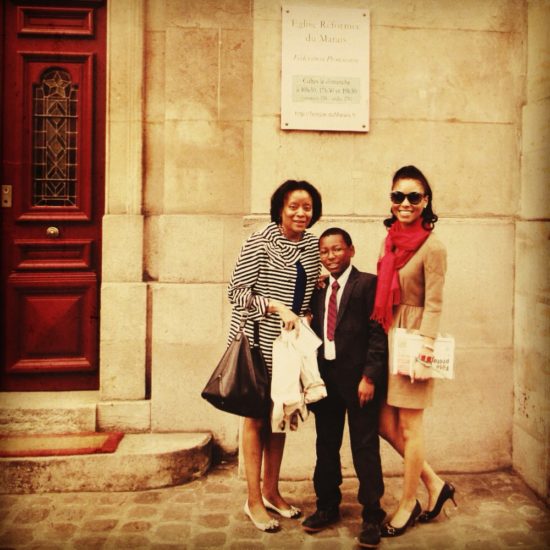 Weptanomah with her son and daughter at the Temple du Marais

So, in order to get our son overseas and not interrupt his perfect attendance, my son and I flew to London during spring break. On Saturday, we took the train to Paris for an overnight stay. Several blocks from our hotel was the Temple du Marais, in French the sign detailed three services for Resurrection Sunday.  I told my children we would attend the 10:30 service.  Though we arrived in good time, we were ushered to an overflow section and I do mean ushered, as no one tried to talk with an usher about seating preferences.  Everyone simply followed the hand signal of the ushers and took the next seat.  With my limited French skills, I could make out a few words of the message from Rev. Caroline Bretones and following the cues for prayer, offering and communion was simple enough.  It was, however, the final hymn that made the tears roll down my cheeks. The congregants sang, A Dieu soit la gloire, Pour son grand amour…I could not believe my ears. Growing up in New Shiloh Baptist Church, my father closed many a service singing in his ringing tenor, To God be the Glory Great Things He has Done…They were singing the chorus, Gloire à Dieu! Gloire à Dieu! Terre, écoute sa voix !Gloire à Dieu !Gloire à Dieu !Monde, réjouis-toi ! In a church where we knew no one, all I could hear was my dad’s singing Praise the Lord, Praise the Lord, Let the earth Hear His Voice, Praise the Lord, Praise the Lord, Let the People Rejoice, Oh come to the Father through Jesus the Son and Give Him the Glory Great Things He hath Done.